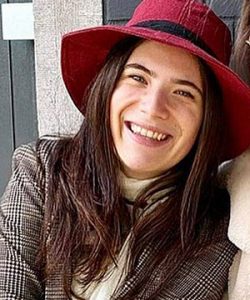 Sophie Delaunay-Vagliasindi has Bachelor’s in Psychological Science from the Université Libre de Bruxelles, in Belgium. Passionate about children and development, she decided to do her Master’s in Developmental Psychology at the University of Kent, Canterbury, UK. Her studies taught her everything there is to know about the brain, different psychological disorders, and different treatments. Her area of interest is autism, and she learned a lot concerning autism’s symptoms, how to communicate with neurodivergent populations, and how to increase their inclusion.

Yet, having read Dr Campbell-McBride’s work during her first year as a student, she kept on waiting for the gut flora to be mentioned in her classes. That did not happen during her Bachelor’s. She then hoped it would during her Master’s in the UK, where the main subjects of the curriculum were autism, ADHD, dyslexia, and many more “GAPS disorders”. Sadly, mental health was never approached from a gut health perspective. Frustrated, she was intimately convinced that the gut-brain approach was something she needed to explore further. So, after she graduated and finished her dissertation on early symptoms of autism, she found the official GAPS training and studied to become a GAPS Coach.

However, this did not feel like enough. She wanted to be able to help families in changing their diets and heal, yes, but she also wanted more doctors and scientists to acknowledge that this protocol is scientific and include nutrition in their perspective of health. Nowadays, mainstream medicine and media tend to underestimate this type of approach, even though the foundations of such nutritional protocols have been accepted by the medical community for centuries. She wanted to do something about it, to have an impact. She reached out to the GAPS team, and they told her about the GAPS Science Foundation.

She is now honored to be part of the team, analyzing case studies, and turning them into academic papers. Research has always been a part of her studies that she enjoyed thoroughly. An opportunity such as working with the GAPS Science Foundation is exactly what Sophie wished for, as it combines her interest in research and her desire to empower holistic approaches such as GAPS. She is currently coaching, writing, and studying a second Master’s part-time to become a Clinical Psychologist. She aspires to become a holistic child and family psychotherapist who includes diet in her practice.